Earlier this year Susan and I attended a Warré beekeeping course in Sydney run by second-generation professional apiarist Tim Malfroy. It seems like a long way to go for a weekend course, but I had read about the Warré beekeeping method and wanted to learn more. It was worth the trip.

I have since become convinced that this is an ideal method for backyard apiarists in Australia, and it would be highly beneficial to bees and beekeepers alike if it became more widely practised. (Yes, I do tend to get evangelical when talking about Warré.)

Two days ago the great day arrived and a swarm moved into our hive. A big, vigorous swarm it is too. The power of a swarm of bees is a remarkable thing. I don't think I'll ever forget the way the air vibrated with that all-pervading hum, as a massive cloud of bees came barrelling up the road and parked itself over our front garden. I felt that we had summoned a force of nature. I actually felt a little scared at what we had unleashed. 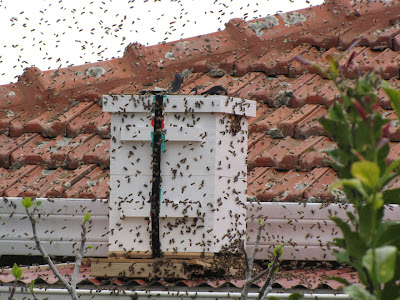 You should be able to view the video on my flickr page here. It really doesn't do the experience justice!

It was particularly satisfying because we had done everything ourselves – learned about bee biology and behaviour and hive management, built the hive according to Émile Warré's design (slightly modified for Australian conditions), set out the bait hive and attracted the bees.

It has been quite a journey so far, and our life with bees has only just begun; there is so much to learn.

Here are a few photos we've taken along the way.

Tim Malfroy's course, April 2012. Because Warré is a low-intervention beekeeping method, most of the course is classroom based, but one of Tim's students kindly allowed the 20 of us to visit her backyard apiary. Here Tim is demonstrating the use of the smoker and opening the hive. The bees remained wonderfully calm throughout. In previous classes Tim has encouraged participants to gently stroke the bees! (Don't do that at home, folks!) 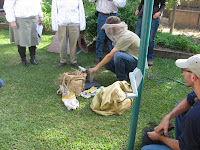 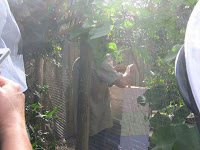 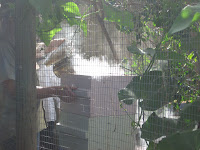 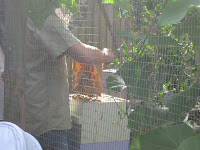 Hive building. The dimensions of a Warré hive are carefully attuned to the bees' requirements. The aim is to provide them with the best home (other than a hollow tree!) that we can, so that we have a healthy, happy, unaggressive colony. I decided to build my own hive from Warré's specifications, adapted by Tim Malfroy for Australian conditions. The joinery is basic but needs to be quite accurate, built to a 1-2 mm tolerance. Inaccuracies will result in ill-fitting frames, which the bees will stick to the sides of the hive box, making your hive illegal. (DPI inspectors are obliged to destroy hives that do not have removable frames.)

I built 8 Warré boxes initially, with four flat roofs and two pitched roofs, meaning that I could set up four 2-box bait hives and then convert them to two full-size Warré hives. The pitched roofs don't just look pretty, they allow maximum thermal insulation for the hive, enabling the bees to control the hive's internal climate. 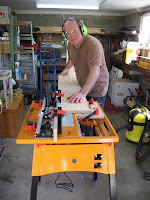 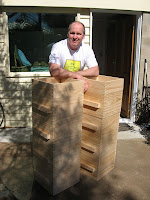 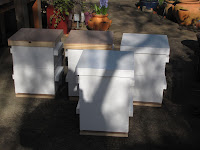 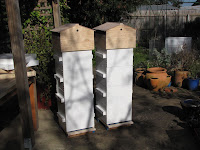 Bait hives. When bees swarm they send out scouts to check out the surrounding area for nest sites. Bees will nest pretty much anywhere that offers them shelter, but they actually rank the available sites according to suitability and reach consensus on the best one! This is a remarkable example of collective intelligence and has been thoroughly researched and documented by Thomas D Seeley, one of the world's eminent bee biologists, in his book Honeybee Democracy.

As it happens (and of course this is not coincidence but design) a two-box Warré hive is the optimum size, shape and configuration for a bee colony. That makes it easier to attract a swarm. This is a great way of getting a genetically diverse, strong colony - and taking a feral swarm out of the environment, which might otherwise nest in someone's roof or wall.

The bait hives need to be in an elevated position and contain some beeswax. We also used a pheromone lure to attract the bees - but only an attractive site can persuade them to stay, this is not a mechanical process. 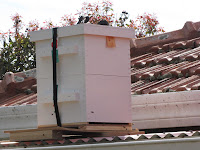 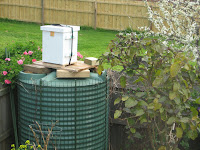 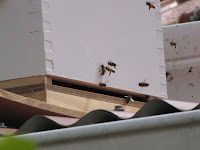 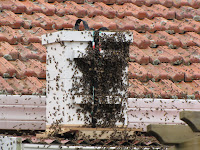 The next stage was to transfer the occupied bait hive to its permanent position. At night and as it happened, in the rain. I don't recommend standing on a slippery stepladder in the dark clutching a box of 10,000 or so bees, but it was the only way to get them down. You only have a day or two to move the hive, otherwise the bees will imprint on their location and always go back there, not to the hive if you move it elsewhere.

The next day our bees were busy getting used to their new surroundings and sending out foragers. By the afternoon we were seeing bees returning with pollen, indicating that the queen was already laying eggs in the newly built comb. 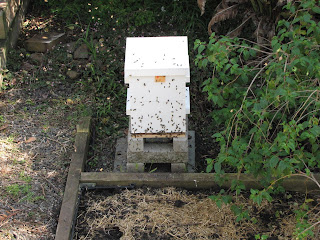 Today we are going to move the hive on to its permanent base and add the quilt (a box of woodshavings above the hive to control humidity) and the pitched roof, which fits over the quilt and prevents rain from entering.

By around Christmas our colony should occupy three or four boxes, so it will look like this. 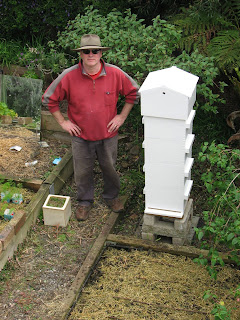 More on Warré beekeeping from my friends Kirsten and Nick at Milkwood Farm, NSW.

Welcome to the DHB blog

We hope you will use this blog to share your ideas and knowledge with other members of the Drysdale Harvest Basket community. Anyone can post comments. Just click on 'Comments' below the post.
If you would like to become a regular contributor, email Steve.